On the road again

I didn't know what to expect today with a new guide and new traveling companions. The guide from my two days in Cappadocia showed up at 8am to start the trip. This guide is a nice man but a bit difficult to understand. We picked up the other two people at a different hotel. Paul and Diana are from Jamaica. Paul has always lived there and Diana is from Canada but lived in England and Jamaica. They are very nice people but I really miss Son and Cindy. What sweet and thoughtful people! So we headed west to Konya which is famous for it's whirling Dervishes. Mevlana Sufism is a sect that was formed. Rumi, a sultanate of Rum, became an Islamic scholar, poet and leader. This group is a conservative group with mystics. They whirl to be closer to Allah. In the Sufi temple is the tomb of Rumi also with many of his relatives. There was an impressive collection of hand printed Korans as well as artifacts. The main dome of the temple is completely covered in blue tiles. It is really beautiful. We had lunch in Konya at a very non touristy restaurant. It was another adventure. I ordered one of the dishes special to the town, called pida. It is pieces of thin bread with diced meat and spices. It was good. We also had a nice soup and bread with yogurt. They are big on yogurt in this country. Then we hit the road for a very long drive to Antalya on the mediterranean. It was a bit boring but we went thru the Taurus mountain range and it was very pretty. Finally we arrived in Antalya at 7pm and went to our hotels. Paul and Diana are at a different hotel than I am. I wasn't too happy but they are close. I walked to their hotel after we got settled in and we went in search of the sea and food. We walked thru narrow cobbled streets in an endless maze but finally after walking down steep streets, found the harbor and were rewarded for our efforts. It is a lovely protected harbor full of boats and people. It was a warm night and as it got dark, all the lights looked dazzling. There is a jetty and stone wall surrounding the harbor that I read was from Roman times. We picked a place to have dinner and had a relaxing meal. And we actually found our way back again! So I am all caught up. Tomorrow we are going somewhere in the morning and I think we have the afternoon to explore. I have to swim in the mediterranean before I leave! 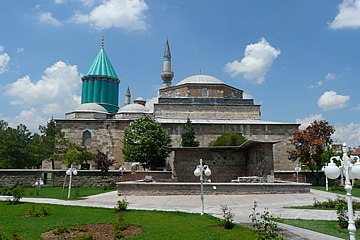 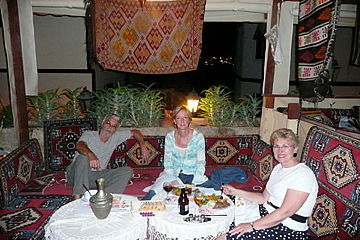 Dinner with Paul and Diana 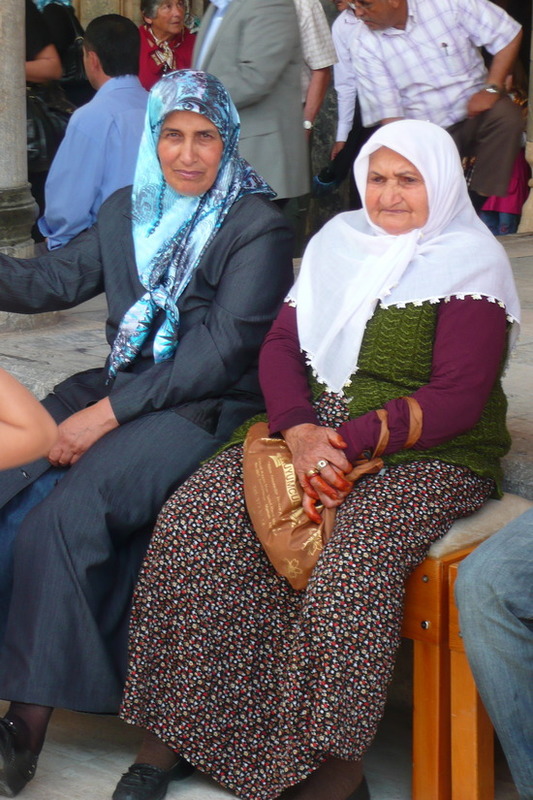 Ladies at the temple