I thought this would be a lighter day but I was wrong. I was picked up at 9:30am so I had a little time to wander around and take some pictures of the harbor. It is so beautiful here! And nice and warm, even a bit hot. No complaints here! We drove a little east of Antalya to a place called Aspendos. It is considered the best preserved Roman theater in Turkey. It was huge and jaw dropping. It was built in the 1st century AD. The area around dates from 800 BC. This theater is being used now for operas and ballets. Next we went to see a big section of the Roman aquaduct system. The Romans were pretty clever in moving water. I was pretty impressed but that was nothing compared to seeing Perge. This is one of the most important towns in ancient Pamphylia. It was at its peak in the 2nd and 3rd centuries. It was a huge place for merchants and had a large bath and market place. There are columns and rooms and pieces of building everywhere. It is slowly being reconstructed but it is so big, it will take a very long time. It was so impressive! The age boggles the mind. The entire area is full of Roman ruins. For a change of pace, we went to a waterfall. It was wooded and really beautiful. We walked around in the cool woods and took lots of pictures. We kept thinking we would be going back and having some free time. It was about 2pm when we finally stopped for lunch. Murat took us to a small uninteresting restaurant. They were pretty incompetent and the food was mediocre and it took forever to get served. After leaving the restaurant, we went to the Antalya museum. That was great because among other things, it was full of artifact from the Perge excavation. There were all kinds of implements and such as well as a ton of statues. Many had been put together but many were in pretty good shape. There were also stone carved coffins. It filled out my imagination of what the site may have looked like. Across the street from the museum was the Mediterranean and a beautiful beach with the mountains in the background looking misty and mysterious. It was beautiful. I got back to my room about 7pm. I may go for a swim in the pool but no time for swimming in the Mediterranean. At least not yet. 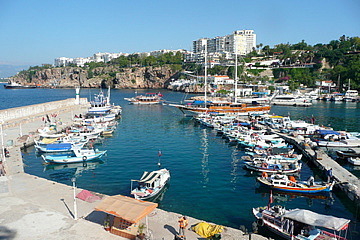 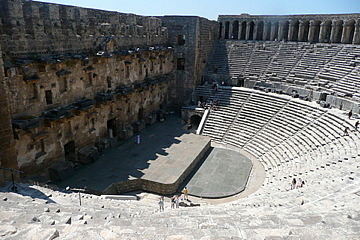 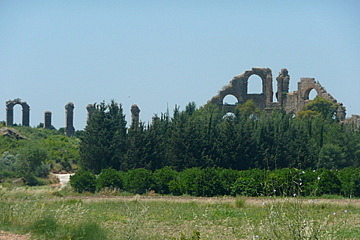 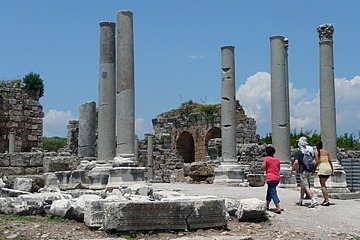 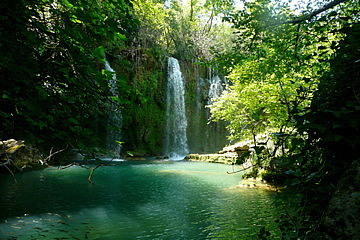 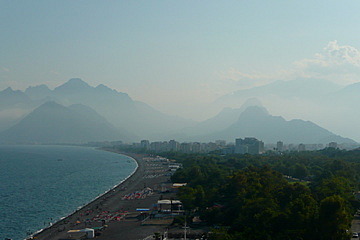 Antalya beach with Taurus mountains behind. 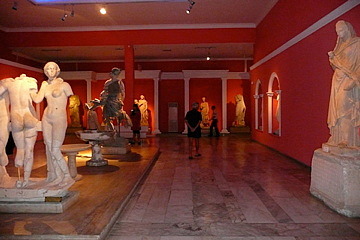