I'm a day behind again and wifi is sketchy here so I'll get started before I leave for my balloon ride.&#160; Yesterday I got on a 7:25am flight to Cappadocia, which is in central Turkey.&#160; After being picked up by my guide, there were seven of us for this day.&#160; Alana is the single woman from Canada that I got to know. We dropped our luggage at this incredible hotel built into the rocks.&#160; Each room is a cave room. All are different and beautifully decorated. &#160; I'm back.&#160; I have spent the last two days looking at rocks and caves and they are amazing.&#160; This area is the product of five thousand years of volcanic eruptions and then centuries of erosion, making all these rock formations.&#160; Add that to the fact that this is where the very early Christians settled in early Roman times.&#160; The balloon ride was so amazing and fun.&#160; It gave me a chance to see the whole area which was bigger than I imagined.&#160; There were table top areas and valleys with the rock formations.&#160; It is thought that it might have been an inland sea. They gave us champagne after the trip and a medal. Because the type of rocks here are fairly easy to carve out, the Christians dug an underground city 8-9 levels below ground to hide in when attacked.&#160; Also, various rocks were carved out to make churches and Monasteries.&#160; So we first went to see the underground city.&#160; Amazing that as deep as it was, they found a way to circulate fresh air.&#160; A few people got claustrophobic since the pathways were narrow and very low in some places.&#160; We went to a couple of rock churches with incredible Christian frescoes.&#160; Unfortunately there had been a lot of graffiti as well.&#160; We were also taken to a pottery factory. Beautiful stuff but out of my price range.&#160; The area of the fairy chimneys was loaded with tourists but it was so amazing to see these unusual formations. This was what I came to see.&#160; I'd better go before the connection breaks. 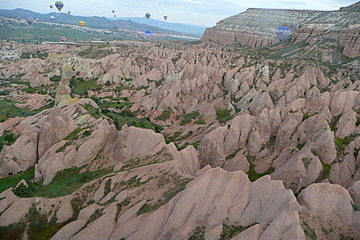 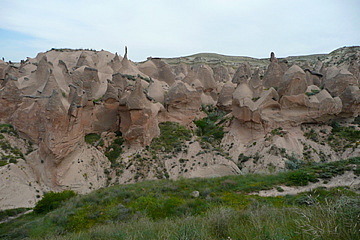 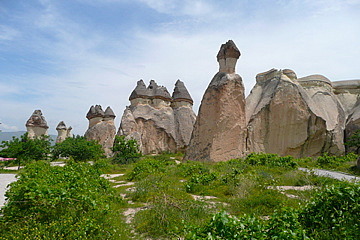 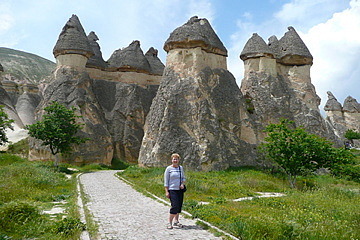 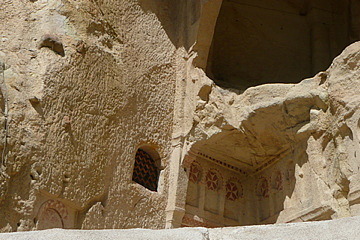